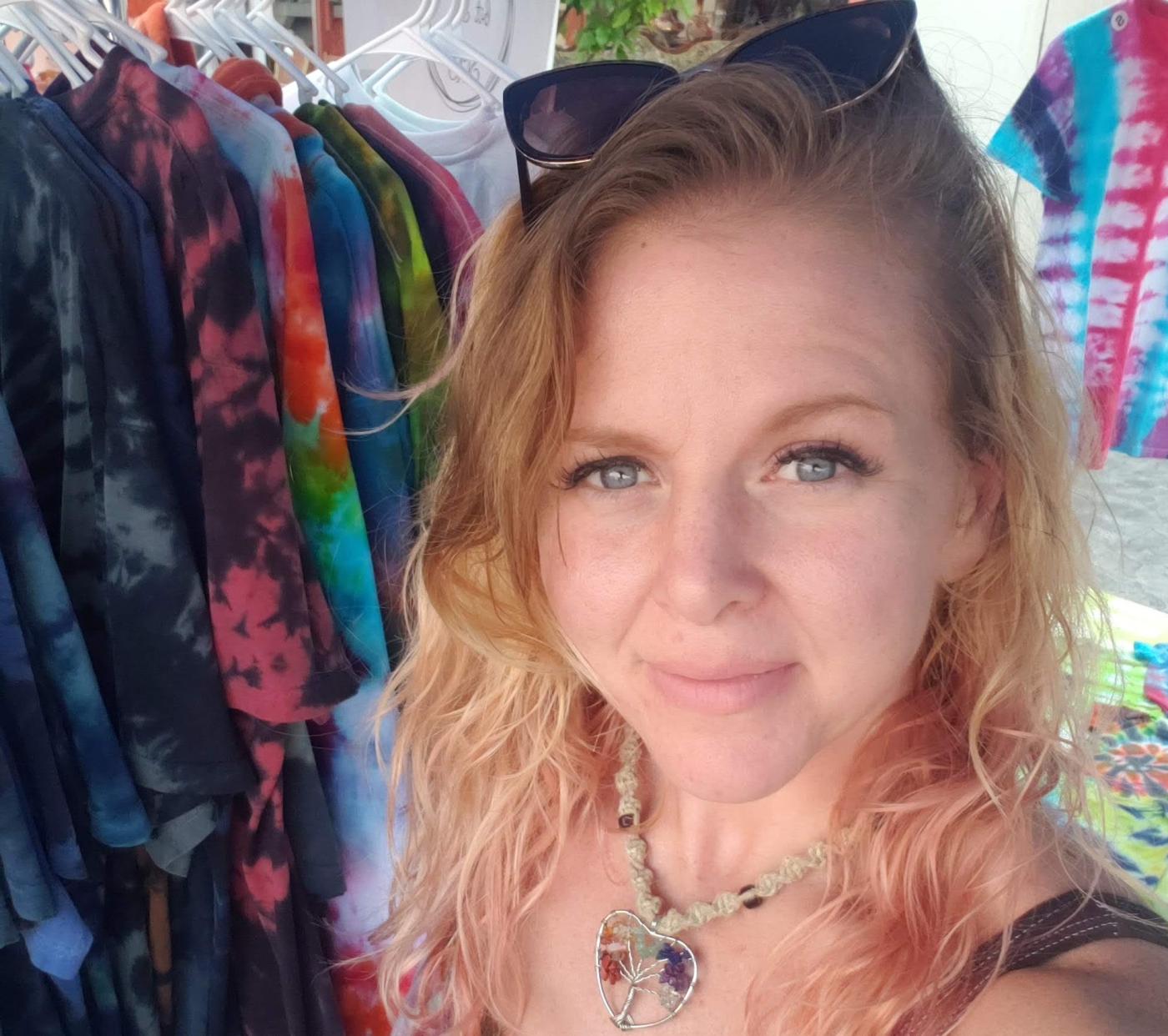 Here is the first post in my ABC (Always Be Creating) Guide to Pandemic Survival: A peek into the life of Rebecca Lyon, a stay-at-home mom of three who also runs a thriving tie dye business.

When Becky Lyon is around, you know it.

A born storyteller and jokester, she has never been accused of being quiet. Her grin is even bigger than her voice and she seems to stand taller then her 5’7″ stature.

She’s also got a remarkable gift of physical coordination that’s uniquely intertwined with her character. For instance, on a night in our early twenties, she jumped over the bar at a jazz club, grabbed some bottles and a martini shaker and proceeded to throw them in the air and catch them behind her back, under a leg and above her head, all while looking in the other direction. The actual bartender might have thrown her out, but at the behest of the whooping crowd he instead bowed in stunned appreciation.

That’s Becky. She has an innate power to command attention.

I’ve known Ms. Lyon since the first grade and many of my early memories of her involve vivid color. Painting in fluorescent pink puff paint. Slicking our nails with blue polish. Dyeing our hair purple with Kool Aid. Eating juicy navel oranges and spitting the pits in the yard.

Given all this, it’s not surprising that she’s built a thriving business on creating unique tie dyes — a product that is at once blaringly colorful, intuitively creative and physically demanding.

As she tells it, the craft found her rather than the other way around.

“I’ve always loved rainbows and bright colors. My father, a carpenter, wore rainbow suspenders every day when I was growing up, like something out of Mork and Mindy,” she told me in a recent phone interview. “Maybe that’s where it stems from, or maybe it’s the tie dyed shirts we saw on our trips to Woodstock when we were in high school.”

I remember these trips, too. My dad would drive us through the winding country roads of upstate New York and treat us to a hot bowl of lentil soup and some crusty brown bread at the local bakery between visits to the incense-scented artisan shops, each littered with tie dye, hand-crafted jewelry, and, er, hand-blown glass.

But her own tie dyeing journey began six years ago, when she bought a kit for her oldest son’s 8th birthday party.

“I was instantly in love,” she said. “I started relentlessly collecting any cotton I could find in the house and tie dyeing it. I watched YouTube videos constantly. Over a few years, I started really getting the hang of it and I would wear my creations to my waitressing job.”

And people took notice. The chef in particular was an avid fan and asked repeatedly for one of her wearable creations.

He would have to wait, though. Becky was heavily pregnant with her third child and the baby came before her opportunity to dye again.

A year and many size 1 diapers later, Becky was back at work and finagling time for her kaleidoscopic passion again. She breathed vibrant new life into gently used hoodies she found at the local Salvation Army and gifted them to the men on staff for Father’s Day. Then, at her boss’s encouragement, she brought in 20 shirts to sell.

And so, in June 2018, she started a Facebook Business Page and immediately began receiving inquiries and orders. Her first out-of-state order was from Colorado, sent by a former little league softball teammate.

“In a day, I sold all but three. That’s when I realized I might have something more than a hobby going.”

“She must have had gobs of tie dye to choose from in Colorado but she liked my work and chose me. I was so touched,” Becky said of the milestone.

Like many of the orders that would follow, this one was highly customized. “Mom wants purple, Johnny wants orange, Dad likes red, zip-up, no zip-up, all the specifics,” she said. “But creating them, ironing them and shipping them out, it was just this incredible feeling, thinking that someone was going to be wearing something I had made.”

It may be hard to believe that someone who has created literally thousands of tie dyed pieces could remember each and every one, but Becky swears this is the case for her.

“I have such a connection to each piece, it’s like giving birth each time. They’re all like my babies, and I think about them when they’re gone.”

In fact, Becky tells me, the spiritual nature of her work goes back even further than her own lifetime. Her Aunt Caroline on her father’s side was also an artist. She passed away at the young age of 25 before Becky was born, but she has long felt a connection to her deceased relative.

The first time Becky attempted to dye a large blanket, for example, she recalls feeling the presence of her aunt’s spirit.

“I had never tied anything like that and had no idea how to do it, but when I opened it up, it was just incredible. I got the confidence then that I could do any kind of larger piece.”

Soon after that experience, her father told her that his sister had actually taken a course in tie dyeing at her college in Arizona in the 1960s (when college was apparently way, way cooler).

“It made even more sense then,” Becky said. “God is just everywhere.”

Now the tie dye maven is working her magic on up to 200 pieces a month — a feat that seems challenging unto itself, let alone while also taking care of three children, two of whom are of preschool age. But she says that the creative process is a crucial outlet for her during this momentously stressful time.

She also squeezes in time for “mental medicine,” the term she uses to describe her CrossFit workouts.

“I wake up each morning and say, ‘Today, I need to take care of myself and my babies. If I do get anything else done on top of that, it’s just a bonus.'”

And for those moments when she’s overwhelmed with an influx of custom orders combined with the steady stream of poopy diapers, temper tantrums and the unrelenting pile of dirty dishes in the sink?

“I just remember that someday they will be grown and I’ll be traveling the world selling my tie dyes on gorgeous white sand beaches,” she jokes.

To place an order, ask a question or offer your gently used whites for Becky’s magical upcycling, please contact her through the Becky’s Tantalizing Tie Dyes Facebook page.

One thought on “Dyeing for a Living: One Mom’s Path to Her Colorful Calling”